Some of our partners, comrades and friends.

War and the International

With the centenary of the First World War upon us the ruling class have wasted no time in attempting to hijack the history of the conflict to serve their view of the world. Here is Leon Trotsky’s analysis of the war, written in 1915. He was sentenced to two years in prison in absentia by a German military court for writing this – its that good! 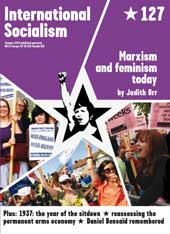 Recently there has been a revival of interest in Feminist ideas. This complex and often misunderstood topic is analysed by Judith Orr in this 2010 article from the ISJ.

Chris Harman’s seminal analysis of the roles and functions of the various types of Political Party. First published in 1969 and as relevant today as ever.