The Socialist Workers Party (SWP) is the largest and best known revolutionary organisation in the UK.

Since it’s formation in 1977 the SWP has been the driving force behind movements such as The Anti Nazi League, Rock Against Racism, The Stop The War Coalition, Respect and Unite Against Fascism.

The party has a very active branch in Waltham Forest that meets every Wednesday at 7.30pm discuss the important events of the day. Everybody is welcome to these meetings.

Locally the party are involved in the campaigns against cuts at Whips Cross Hospital, the Bedroom Tax, The Peoples Assembly and in 2012 we were heavily involved in the mobilisation against the Nazi English Defence League that brought thousands of people onto the streets of E17 and helped break that organisation. 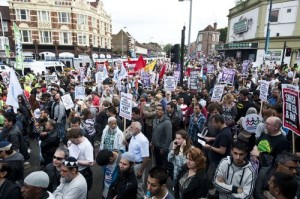 The We Are Waltham Forest protesters occupying the junction of Hoe Street and Forest Road during the anti EDI demonstration in September 2014. (Pic: Guy Smallman)

We sell our weekly newspaper Socialist Worker at various locations around Waltham Forest but you’ll usually find us outside Sainsbury’s on Walthamstow High Street on Saturday lunch times.

If you have any questions or want to know more about the SWP please email info@walthamforestswp.org.uk or pop along and see us at our paper sale.

If you’d like to join up and get involved with the struggle against capitalism and for a better world go to http://www.swp.org.uk/forms/join-swp